I’ve published a few articles on Medium that may interest the reader here:

Understand how rAF callbacks are scheduled and why its very reasonable to have multiple callbacks execute within the same frame.

The canonical guide to using the Chrome DevTools UI for debugging Node.js. It definitely beats console.log. ;)

Aside from that, I’ve been busy working on Lighthouse, performance metrics, tooling, and DevTools.

Recently, I’ve spent some time recently profiling real-world mobile websites. Using the 1000/100/6 performance model1, and spelunking deep into each app, the findings have been fascinating.

I’ve written up case study documents for each, incorporating all the findings:

In this doc, we look at the scrolling of CNET, input latency on CNET, some very interesting challenges on the responsive Time.com, and infinite scroll on Google Play’s desktop site.

The intended audience is browser engineers and performance-minded frontend developers. It’s fairly advanced, but I’m spelunking deep to identify how the sites butt heads with the browser APIs and architecture.

Lastly, we’re using this research to improve Chrome DevTools and what you hear from Chrome. 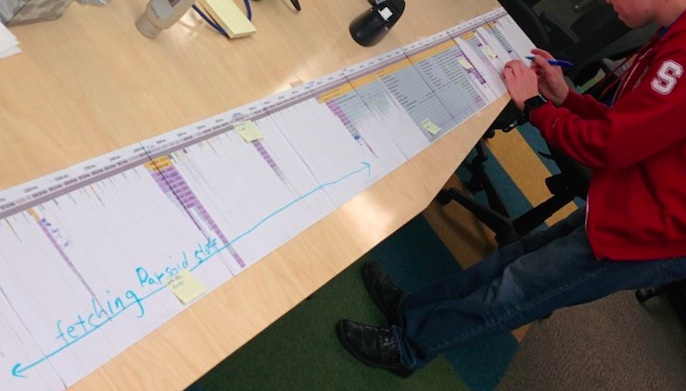 (BTW, use this link to view the same doc but with comments enabled)

Feb 2015: A lot’s happened since I wrote this post two years ago. Chrome forked WebKit and started Blink, Opera adopted Chromium, and node-webkit became nw.js. This post describes a complexity of defining WebKit that doesn’t exist much anymore; with Chrome’s departure the WebKit world is more simple and clear.

WebKit is deployed through iOS Safari and Mac Safari, and the active GTK community leverages WebKit inside the GNOME Platform. Some smaller mobile browsers use WebKit, some Chromium, some use forks of either, and many just use the system WebViews that are both powered by up-to-date version of iOS WebKit and Android Chromium.

The post below is kept intact and represents a snapshot of history in early 2013, rather than the modern WebKit landscape. For many of us developers, WebKit is a black box. We throw HTML, CSS, JS and a bunch of assets at it, and WebKit, somehow.. magically, gives us a webpage that looks and works well. But in fact, as my colleague Ilya Grigorik puts it…

WebKit isn’t a black box. It’s a white box. And not just that, but an open, white box.

So let’s take a moment to understand some things:

What is WebKit?
What isn’t WebKit?
How is WebKit used by WebKit-based browsers?
Why are all WebKits not the same?

Now, especially with the news that Opera has moved to WebKit, we have a lot of WebKit browsers out there, but its pretty hard to know what they share and where they part ways. Below we’ll hopefully shine some light on this. As a result you’ll be able to diagnose browser differences better, report bugs at the right tracker, and understand how to develop against specific browsers more effectively.

Let’s lay out a few components of the modern day web browser:

Which of those are shared in WebKit-based browsers? Pretty much only the first two.

The others are handled by individual WebKit ports. Let’s review what that means…

There are different “ports” of WebKit, but allow me to let Ariya Hidayat, WebKit hacker and eng director at Sencha to explain:

What is the popular reference to WebKit is usually Apple’s own flavor of WebKit which runs on Mac OS X (the first and the original WebKit library). As you can guess, the various interfaces are implemented using different native libraries on Mac OS X, mostly centered around CoreFoundation. For example, if you specify a flat colored button with specific border radius, well WebKit knows where and how to draw that button. However, the final actual responsibility of drawing the button (as pixels on the user’s monitor) falls into CoreGraphics.

As mentioned above, using CG is unique to the Mac port. Chrome on Mac uses Skia here.

With time, WebKit was “ported” into different platform, both desktop and mobile. Such flavor is often called “a WebKit port”. For Safari Windows, Apple themselves also ported WebKit to run on Windows, using the Windows version of its (limited implementation of) CoreFoundation library.

… though Safari for Windows is now dead.

Beside that, there were many other “ports” as well (see the full list). Google has created and continues to maintain its Chromium port. There is also WebKitGtk which is based on Gtk+. Nokia (through Trolltech, which it acquired) maintains the Qt port of WebKit, popular as its QtWebKit module.

Some of the ports of WebKit

Different ports can have different focuses. The Mac port’s focus is split between Browser and OS, and introduces Obj-C and C++ bindings to embed the renderer into native applications. Chromium’s focus is purely on the browser. QtWebKit offers its port for applications to use as a runtime or rendering engine within its cross-platform GUI application architecture.

What’s shared in all WebKit browsers

First, let’s review the commonalities shared by all WebKit ports.

You know it’s funny. I tried writing this a few times.
Each time I got corrected by Chrome team members, as you’ll see…

Just like how Flickr and Github implement features behind flags, WebKit does the same. This allows ports to enable/disable all sorts of functionality with WebKit’s compile-time Feature Flags. Features can also be exposed as run-time flags either through command line switches (Chromium’s here) or configuration like about:flags.

What’s common to every WebKit port

It gets a little murky in those areas. Let’s try some differences that are much less murky.

Let’s take one of these: 2D graphics Depending on the port, we’re using completely different libraries to handle drawing to screen: 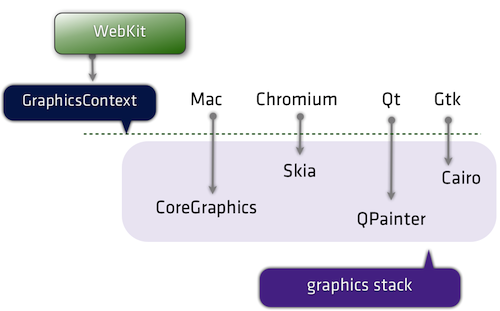 Or to go a little more micro… a recently landed feature: CSS.supports() was enabled for all ports except win and wincairo, which don’t have css3 conditional features enabled.

Now that we’ve gotten technical.. time to get pedantic. Even the above isn’t correct. It’s actually WebCore that’s shared. WebCore is a layout, rendering, and Document Object Model (DOM) library for HTML and SVG, and is generally what people think of when they say WebKit. In actuality “WebKit” is technically the binding layer between WebCore and the ports, though in casual conversation this distinction is mostly unimportant.

A diagram should help:

Many of the components within WebKit are swappable (shown above in gray).

As an example, WebKit’s JavaScript engine, JavaScriptCore, is a default in WebKit. (It is based originally on KJS (from KDE) back when WebKit started as a fork of KHTML). Meanwhile, the Chromium port swaps in V8 here, and uses unique DOM bindings to map things over.

Fonts and Text rendering is a huge part of platform. There are 2 separate text paths in WebKit: Fast and Complex. Both require platform-specific (port-side) support, but Fast just needs to know how to blit glyphs (which WebKit caches for the platform) and complex actually hands the whole string off to the platform layer and says “draw this, plz”.

“WebKit is like a Sandwich. Though in Chromium’s case it’s more like a taco. A delicious web platform taco.” Dimitri Glazkov, Chrome WebKit hacker. Champion of Web Components and Shadow DOM

Now, let’s widen the lens and look at a few ports and a few subsystems. Below are five ports of WebKit; consider how varied their stacks are, despite sharing much of WebCore.

* A side note on Chrome for IOS. It uses UIWebView, as you likely know. Due to the capabilities of UIWebView that means it can only use the same rendering layer as Mobile Safari, JavaScriptCore (instead of V8) and a single-process model. Still, considerable Chromium-side code is leveraged, such as the network layer, the sync and bookmarks infrastructure, omnibox, metrics and crash reporting. (Also, for what it’s worth, JavaScript is so rarely the bottleneck on mobile that the lack of JITting compiler has minimal impact.)

All right, so where does this leave us?

So, all WebKits are totally different now. I’m scared.

Don’t be! The layoutTest coverage in WebKit is enormous (28,000 layoutTests at last count), not only for existing features but for any found regressions. In fact, whenever you’re exploring some new or esoteric DOM/CSS/HTML5-y feature, the layoutTests often have fantastic minimal demos of the entire web platform.

In addition, the W3C is ramping up its effort for conformance suite testing. This means we can expect both different WebKit ports and all browsers to be testing against the same suite of tests, leading to fewer quirks and a more interoperable web. For all those who have assisted this effort by going to a Test The Web Forward event… thank you!

Opera just moved to WebKit. How does that play out?

Robert Nyman and Rob Hawkes touched on this, too, but I’ll add that one of the significant parts of Opera’s announcement was that Opera adopted Chromium. This means the WebGL, Canvas, HTML5 forms, 2D graphics implementations–all that stuff will be the same on Chrome and Opera now. Same APIs, and same backend implementation. Since Opera is Chromium-based, you can feel confident that your cutting-edge work will be compatible with Chrome and Opera simultaneously.

I should also point out that all Opera browsers will be adopting Chromium. So Opera for Windows, Mac and Linux and Opera Mobile (the fully fledged mobile browser). Even Opera Mini, the thin client, will be swapping out the current server-side rendering farm based on Presto with one based on Chromium.

.. and the WebKit Nightly. What is that?

It’s the mac port of WebKit, running inside of the same binary that Safari uses (though with a few underlying libraries swapped out). Apple mostly calls the shots in it, so its behavior and feature set is congruent with what you’ll find in Safari. In many cases Apple takes a conservative approach when enabling features that other ports may be implementing or experimenting with. Anyway, if you want to go back to middle-school analogies, think of it as… WebKit Nightly is to Safari what Chromium is to Chrome.

Chrome Canary also has the latest WebKit source within a day or so.

Tell me more about WebKit internals.

You got it, bucko. Hopefully this article described a bit of the internals of WebKit browsers and gave some insight on where the WebKit ends and the ports begin.

Heyo, I’m a front-end developer,
and work on the Google Chrome team focused on Developer Tooling.